Happy Holidays!  Thank you everyone for reading and I look forward to watching a lot more shows with you in 2018!

Well, another season of Survivor is in the books!

Survivor Heroes vs Healers vs Hustlers was one of the stranger seasons of Survivor.  I hate to admit but, as a viewer, I never really got into this season.  Some of the castaways, I liked but I don’t think I ever really had a favorite during this season.  In fact, I think this may have been the least likable group of Survivors since the fifth season, Survivor: Thailand.

I’m happy Ben won.  I didn’t think I would be because, during this season, there have been times that I really disliked Ben.  On the one hand, Ben did have a compelling personal story.  On the other hand, the guy could really be a jerk sometimes.  But, tonight, I found myself rooting for Ben to win.

A lot of it has to do with the fact that the other members of the final five were so unlikable.  For a self-described strategic genius, Chrissy did a lot of dumb things and I think a lot of her success in the game had more to do with the other players being weak than with her being strong.  For me, the last straw was when Chrissy decided to try to fool Ben with a fake idol.  Maybe if Chrissy had made some sort of effort to the find the real idol, it wouldn’t have bothered me.  But instead, she and her alliance let Ben continually go off on his own.  They made no effort to find the idol on their own.  And then Chrissy not only tried to trick Ben with an obviously fake idol but she also acted very smug about it as well.

As for the other three members of the final five, I liked Ryan but he really didn’t do much during the game beyond take orders from Chrissy.  I liked Dr. Mike but he was all over the place strategy-wise.  Devon basically tried to coast to the end on his smile.  It’s a nice smile but a smile isn’t much use when your life in the game depends on being able to make a fire.

So, by default, I wanted Ben to win and he did.  And this very strange season of Survivor came to an end.

What did everyone think of the final twist?  Personally, I liked it.  Instead of allowing Chrissy to just bring the weakest players to the end, it instead forced everyone (but Ryan) to really fight for their right to make it to the final three.  I’m not really sold on how they’re doing the jury now.  I miss the days when everyone would ask one question and then shut up.

Well, that’s it for Survivor 35!  This will probably be remembered as one of the less regarded seasons of Survivor.  Survivor: Ghost Island might be fun.  If nothing else, I like the horror theme!

As for me and my reality TV coverage, I’ll be back next year for The Amazing Race and Celebrity Big Brother!  I hope to see y’all then!  Thank you everyone for reading and happy holidays! 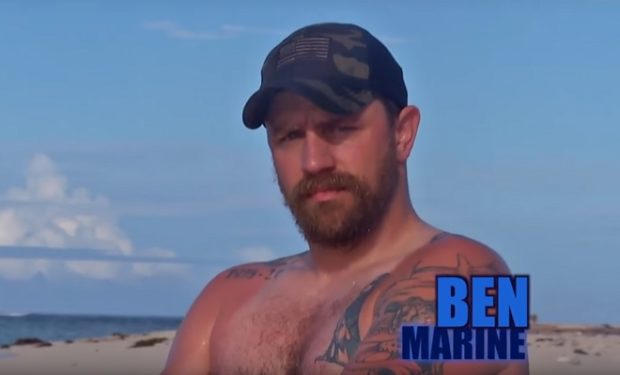 Ben, the winner of Survivor 35

I just watched last night’s episode of Survivor, which ended with Ben finding (and playing) yet another immunity idol and Chrissy stabbing Ashley in the back and sending her to jury.  Ben thought he’d be able to get everyone to vote for Dr. Mike when he revealed his idol but what Ben did not know is that Chrissy had already decided that she wanted Ashley to go.  It made for a good and exciting tribal council but, for the most part, Ben wasted his idol.

Ashley was not happy about being voted out.  She accepted a “good game” from Ben but coolly rebuffed Devon when he attempted to hug her.  I can understand Ashley feeling betrayed but still, this is Survivor.  Someone has to get voted out and Ashley has no one to blame but herself for not realizing that she was a target.

So, we’re now down to the final five.  The finale is next week.  This has been a weird season.  It started out strangely and it’s just gotten stranger from there.  With the exception of Ryan and Chrissy, no one seems to trust or have any loyalty to each other.  No one really seems to understand how Survivor works, either.  What were they thinking letting Ben go off by himself last night?  Did they seriously think there wouldn’t be another idol out there for him to find?

It’s taken a while for me to get to know this group of castaways.  In fact, it’s only been during the last three episodes that I’ve really been able to say why I like or dislike certain people on the tribe.  And now, as I look at the Final Five, I ask myself:

Is this the least likable final five in the history of Survivor?

It’s hard to say and, of course, these things are subjective.  But let’s look at who we have left:

This is not the greatest final five of all time but, come Wednesday, one of them is going to win Survivor 35.

Hi, everyone!  I apologize for this late recap, I’m running a bit behind.  ‘Tis the season and all…

Anyway, I liked last night’s episode of Survivor.  This has been a strange season but I finally feel like I’m getting to know these people and I’m starting to understand why they’re doing some of the things that they do.  That certainly helped with last night’s episode, which was pretty much all about big personalities.

It’s interesting just how personal this game has gotten.  Chrissy and Ben absolutely hate each other, which is leading to both of them acting in ways that are more than a little reckless when you’re playing for a million dollars.  Last night started with Ben making a fake immunity idol, specifically so he could humiliate Chrissy at the next Tribal.  It ended with Ben offering to work with Chrissy and Chrissy conflicted because she couldn’t look past her hated of Ben to see that she desperately needs an ally other than just Ryan.

Last night was also the loved ones challenge.  It was a simple challenge, one that simply required that the castaways and their loved ones pick the same rock out of a bag.  Chrissy won and, without hesitation, she invited Ryan, Dr. Mike, and Ashley to join her on the reward.  Chrissy made a pitch to Ashley, trying to pull her into a new alliance.  Both Chrissy and Ashley want Ben gone so it seemed like a good idea.

Except, of course, none of them realized that Ben had an immunity idol.  Though Ben tried to get everyone to join him in voting out Lauren, every one still ended up voting for Ben.  But then Ben played his idol and Lauren was sent to jury.  One vote.  That was all it took to end Lauren’s game.  It was a great Survivor blindside.

It was also a great tribal.  Lauren made the mistake of allowing Dr. Mike to hold onto half of her immunity idol.  She thought it would prove her trustworthiness.  Dr. Mike responded by tossing it into the fire.  In the end, Ben survived but he’s now in a terrible spot.  No one trusts him.  No one wants to take him to the end.  And he no longer has an idol.  If he doesn’t win the next immunity challenge, he’s in trouble.

Things are coming to a close.  So, who is left now that Lauren has been voted out and what are their chances of being the sole survivor?

So, who will win?  If I had to guess, I’d say it’ll be Devon, Ashley, and Mike in the final and I would pick Devon will win.

The newest member of the jury, Lauren!