I just wanted to take this moment to wish all of you a happy and joyous holiday!  Thank you for reading last year and I look forward to writing about the new season of Survivor!

Have a great holiday!

Well, another season of Survivor has been completed!  We started tonight’s finale with 6 castaways left and, by the end of the show, we had three left.  And amazingly enough, it was the three that I predicted in my previous post!  I’m either brilliant or I’m extremely lucky.

I’m going to go with lucky.

Since we started the 2 and a half hour finale with 6 people still left in the game, things occasionally felt a little bit rushed.

In quick order, the following happened:

Knowing that Jay was really good at finding immunity idols, David made a fake one.  Jay found it and believed himself to be safe.  Ken, meanwhile, actually was safe because the legacy advantage gave him immunity.  And David actually won immunity!

So, at tribal council, Jay played his fake idol and was promptly voted out.  To his credit, Jay laughed and took it well.

Adam then managed to find a real immunity idol (and I’m not sure how much I like an immunity idol still being in play that late in the game) and he used it at the next tribal.  Adam was hoping to keep himself safe and vote out Dave.  However, Hannah told Dave about Adam’s plan so Dave, Ken, and Hannah voted out Brett.  Brett threw a little fit on his way out, largely because Brett’s a 40 year-old, 250-pound child.

Ken won the final immunity challenge and, at tribal, he finally made a game move when he betrayed his closest ally and voted to send David to the jury.

That left Ken, Hannah, and Adam as the final three and the outcome was never in doubt.  During the final jury, Ken struggled to point out any moments when he actually played the game.  Hannah tried her best but, again, she most came across as a follower.  In the end, Adam came across as a strong and competent player.  It also helped that he had a compelling personal story.

Adam won.  Adam won unanimously.  Every member of the jury voted for him.

So, to sum up … here’s who would have won in a perfect world… 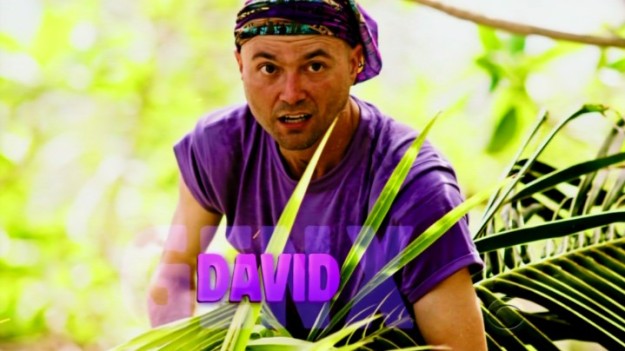 Here’s who won in the real world…

Well, that’s it.  It’s time for me to take a little break from writing about reality television but I’ll be back next year to continue to cover Survivor, The Amazing Race (if it ever returns), and Big Brother!

Thanks for reading everyone!

Well, I have to apologize.  Last week, I had to take care of some personal business and, while I watched the show, I did not get a chance to do a write up.  For the record, Will was voted out and then Sunday was voted out.  Will was voted out because he started to get a big head.  I don’t think anyone was surprised when that happened.  Sunday was voted out because … well, I’m not sure why they decided to get rid of Sunday as opposed to an actual threat, like Dave.  Hannah seemed to be really desperate to get rid of Sunday, largely because she realized that Sunday would probably get taken to the end because everyone knew that they could beat her.  Apparently, Hannah wants to be the largely useless third wheel who is taken to the end because there’s no threat of her actually winning.

So, tomorrow is the finale!  I’m really excited to see who wins.  Despite the fact that I’m not a big fan of the Gen X vs. Millennial theme, this has been a pretty good season of Survivor.  We’ve heard memorable players, dramatic tribal councils, and unexpected blindsides!  What more could you want?

So, here are my thoughts on the 6 finalists:

David — Oh my God, who would have guessed that the neurotic and seemingly fragile David would somehow emerge as this season’s power player?  By any and all logic, Dave deserves to win this season.  Not only has he had the most interesting journey in the game but he’s also proven himself to be a surprisingly good strategist.  If nothing else, he deserves a lot of credit for surviving despite being everyone’s number one target.  Sadly, I think Dave might have trouble making it to the final three.  He’s too much of a threat to win.  If he can’t win immunity tomorrow night, he’s going to have to hope that Ken stays loyal to him.  Speaking of which…

Ken — I love Ken.  I can’t help.  He’s totally full of himself and he’s kind of flaky but seriously, he’s such a character.  He’ll be discovering the details of his “advantage” and it’ll be interesting to see if it will help him or if it will just prove to be one of those anti-climatic Survivor twists that don’t really do much to change the game.  Because Ken has been such an aloof player and has no head for strategy, it wouldn’t surprise me if he made it to the final three.  I imagine that everyone feels that they can beat Ken.

Brett — Brett has somehow made it to the final 6, despite not being a very smart or very good player.  If Brett somehow manages to win, I’m sure the first thing that he’ll do is go out and get a drink.  And then another drink…and another…and another…

Hannah — The last woman standing is the epitome of someone you bring to the end because you know you can beat her.  The only question about Hannah is whether or not she’ll be able to get through the final tribal council without having a panic attack.

Adam — The jury may hate Adam but he’s still a real threat to win.  Adam has been ruthless.  Adam has been a jerk.  Adam talks too much for his own good.  But Adam has a compelling personal story.  With his mother dying, can anyone blame him for playing hard?  If the remaining players are smart, they’ll get rid of Adam before they reach the final three but I think the rest of tribe has consistently underestimated him.

Jay — Jay may not be the most likable person on the tribe but he’s definitely a strong contender.  He’s played hard.  He’s won challenges.  He’s survived, despite being everyone’s target.  If Jay makes it to the final three, he’ll definitely start out with the votes of Michelle and Taylor and he’ll be a real threat to win.  Since Jay gave up his idol, he’s going to need to win immunity because, if he doesn’t, he’s going to be everyone’s number one target.

So, who do I think will win?  It depends who makes it to the final three.  The strongest final three would definitely be David, Adam, and Jay.  The weakest would be Brett, Hannah, and Ken.  My prediction is that everyone’s going to come after David and Jay, which will allow Adam to slip by.  Of the remaining players, I think Adam will feel that he has a better chance to beat Ken and Hannah than Brett.

And my guess is that Adam will ultimately win. 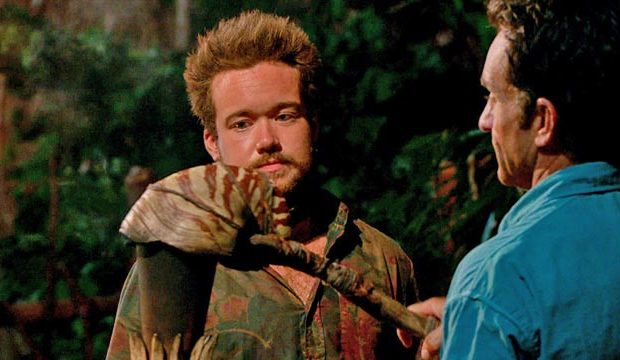 Well, on Wednesday, I was at a movie when Survivor aired so I have just now finally gotten a chance to sit down and watch the latest  episode.  About To Have A Rumble featured not only another great tribal council but it also featured the seasonal Loved Ones challenge.  This is the challenge where the castaways compete for an opportunity to spend the day with a loved one.

This is always an emotional episode but that was especially true last night.  I don’t know if I’ve ever seen so many tears shed during an episode of Survivor.  What was interesting is that it really did change the way that I felt about some of the castaways.  I’ve spent this season hating on Jay but his tears and emotions were so sincere that, as I watched the episode, I couldn’t help but start to like him.

(Seriously, is it me or has Jay become a lot more likable now that Michelle, Taylor, and Figgy are no longer around?)

I’ve also been pretty dismissive of Adam but he brought tears to my eyes, both with his refusal to use his advantage and his conversation with his brother about his mother’s health.  (Sadly, Adam’s mom died two days after the Survivor finale was filmed.)

This season, the visit from the loved ones served to remind us that, regardless of whether we like how they have played the game up to this point, all of the castaways are still human beings.  None of them are 100% good and none of them are 100% evil.  Instead, they’re all human.

For the record, Jay won the reward challenge.  He shared his reward with Will, Sunday, Adam, and their loved ones.  Jay said that he had to reward Sunday because she kept her word to him and it would seem that Jay and her are a lot closer than has been shown up to this point.  Will was rewarded because he has been Jay’s ally since the season began.  Adam was rewarded for refusing to use his advantage.

The rest of the episode was pretty much dominated by Will.  After spending almost the entire season as a sort of mascot for the Millennials, Will has decided that he wants to be taken seriously.  As a result, he came up with a plan to flip the vote and blindside Zeke.

It was a good plan and it made a lot of sense because Zeke was obviously the biggest threat in the game.  It nearly didn’t work, however.  Now, don’t get me wrong.  I love Ken.  Ken makes me smile.  But he’s not the best player in the game.  He often seems to be in his own little world.  As a result of this, Ken nearly destroyed the plan to get rid of Zeke.

What happened is that Will told Ken that Zeke and his allies were planning on voting for him.  Despite the fact that Ken had the numbers to stay, he still felt the need to confront Zeke’s alliance about their plans.  By doing so, he revealed that Will was planning on betraying Zeke.

Instead of automatically switching their target over to Will, Zeke and his alliance decided to target Hannah instead.  (They were worried that, if David had another idol, he would play it for Ken.)  Zeke felt that he had brought Will back into his alliance.

Well, Zeke was mistaken.  At the start of this season, Zeke came across as being neurotic but likable but, over the course of the last two episodes, he revealed himself to be very cocky and very arrogant and that cockiness did him in.  At tribal council, both of the alliances argued that Will should vote with them.  In the end, Will voted for Zeke.

As a result, Zeke would have been voted out regardless of whether or not Adam played his idol.  However, Adam did play his idol for Hannah.

And so, Zeke left.  Seeing as how Zeke was previously the most powerful castaway in the game, it’ll be interesting to see who steps into the power vacuum next week!  I have a feeling that Will’s going to try and it’s going to backfire on him.

By the way, am I the only one who finds Will to be hilarious?  He is so melodramatic!

We’ll see what happens next week!